Anyone like to review an early 19thC crime story, WINTER HUNT by Allen Makepeace (that's me, folks!)?  You can sample it on Amazon: if you wish to continue, contact me via http://www.johnniejohnson.co.uk/ where it's featured and I'll send you a pdf 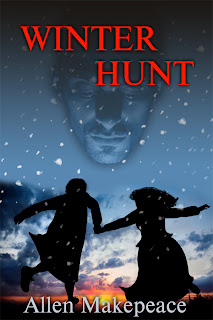 And that's all this time.
Posted by johnnie johnson at 07:35 No comments:

A REALLY GOOD READ IN SPITE OF...

I’ll tell you what I was going to say when I finished this book, my first Martina Cole gangland novel. I had it in mind to muse on the fact that she is a best-selling author, that she certainly knows the world of crime and criminals and that she is without any doubt a compelling story teller. Dangerous Lady absolutely zips along and the reader is drawn into a gripping crime story, a crime saga, dealing as it does with the Ryans, an criminal family, over a period of thirty years. It’s a tale of protection rackets, grubby London clubs, gold bullion robberies, violent characters, brutal killings and a most determined and ruthless woman who might never have turned to crime had it not been for sad chance.

Then, having told you what a splendid tale-teller Ms Cole is, I was going to say that she’s not a great writer. Can that be so? Does it make sense? I think it does. Her prose style is clumsy, undeveloped, and her dialogue is wooden. And yet, despite these drawbacks, her story is undeniably riveting.

Well, that’s what I was going to say (yes, I know, I’ve said it) until I thought I’d just check up some background details and I discovered that this was her first book,  written when she was only twenty, that she finished it and locked it away in a cupboard for a couple of years. Then, it seems, that quite by chance she came across it and decided to send it to an agent. Seems an unconvincing tale, a bit too romantic and totally unconvincing, but that’s where she set off on her path to fame and the book was an instant best-seller. And more best sellers followed, four of them made into outstanding television serials.

So, I think I ought to hold back in my judgement and read more of Ms Cole’s work. And I have to say that I’m really looking forward to doing so.

In the meantime, I’m looking in the cupboard at home because I fancy I put a really great story in there several years ago.
Posted by johnnie johnson at 08:03 No comments:

I wish that I'd been able to finish this story. It's always a problem when you face a book that is acknowledged as a significant work and then find that you somehow cannot get into it.
I couldn't identify with any of the characters but if the plot had been plausible it might have carried me along. But alas it wasn't so. At least not to me.
It's times like this when I have considered going with the flow rather than be branded a yahoo. I don't know: do other readers feel under some pressure to admire or to claim to enjoy highly praised books? Do other readers sometimes ask themselves, What's wrong with me that I cannot appreciate a work which so highly regarded? Are my literary taste buds less refined than others'? Maybe that's it.
Try as I might I really have found this book totally unappealing.
Posted by johnnie johnson at 03:53 1 comment:

Review of In the Shadow of the Sword: The Birth of Islam and the Rise of the Global Arab Empire

You might liken Tom Holland’s book to a great canvas of dark landscapes on which great swathes of lightning reveal grim images of slaughter; here, 10,000 corpses butchered in Samaria and 20,000 dead at another place and yet another time, 50,000; a bishop burns in a fire of martyrs’ bones; a Persian king humiliates a Roman emperor, using him as a mounting block before despatching him; elsewhere the newly slaughtered are covered with carpet to serve as a gruesome banqueting table. It is painted, this portrait, in blood for these are the convulsions of two nations. The , in barbarian hands, is ailing though the world still bears such wonderful cities as and , and .

But if the two great empires, the Persian and the Roman, had made their mark on the Ancient World they were by the 7th century tired out by incessant warring, by famine, by plague.

And why all this war? Was it all about belief? About the worship of pagan gods? Or the Jewish god? Or that strange god who was his own father, his own son, and at the same time a joint Holy Spirit? Oh, the struggles in the various communities to work out the nature of their god. The scholars, Christians, Jews, Zoroastrians, arguing, cajoling, persuading and the emperors knew not what to make of it until came along.

Emperor Constantine could not make up his mind about whom to acknowledge as the true god – should it be Apollo or the god of the Christians? – until he had a vision (or did he toss a coin?) At a stroke, – centred now in - was declared a Christian state. Not that the declaration was accepted universally.  It took more years and another emperor to brutally enforce the state religion upon the diverse peoples of the declining empire.

And then along came Mohammed and his followers, quite out of the blue it seems. And within half a dozen decades the Arabs, many of whom who had learned their trade as mercenaries in the armies of or , had conquered vast territories. And it seems as if in no time they came out of their deserts and had shed their pagan gods in favour of a new monotheistic belief. But it does seem at times to have been borrowed in part from the old Greek myths as well as from the writings of the Jews and the Christians. points out how little is known of Mohammed until almost two hundred years after his death and certainly there is little of Islam’s early years to help the historian unravel its development. Here, the author is asking the pertinent question: how much are we to believe of what we are told about that period, those crucial missing years?

What a hotch-potch. What a difficult story to tame with its roots in rumour mills and propaganda, in unsubstantiated declarations and self-serving claims. Yet Tom Holland keeps the tale going, interpreting and of course guessing as all historians must when faced with such variety of not always reliable evidence. It’s great read but one that is not easy for the detail at times is both overwhelming and vague. There are gaps, not of the author’s making, but because of history’s silence.

Posted by johnnie johnson at 08:15 No comments: